On July 25, 2021, almost 1000 of us – undocumented, migrant worker, refugee, student worker – took over the streets of Ottawa to demand full and permanent immigration status for all now from the Trudeau government. We came on buses, cars, trains and bikes from around the country.

Our historic march was covered on the CBC, Capital Current, Radio Canada, Journal de Montréal, Le Droit, La Presse, TVA Nouvelles, and Ming Pao.  Scroll below to watch this Global TV coverage featuring the voices of migrants from across Ontario and Quebec. 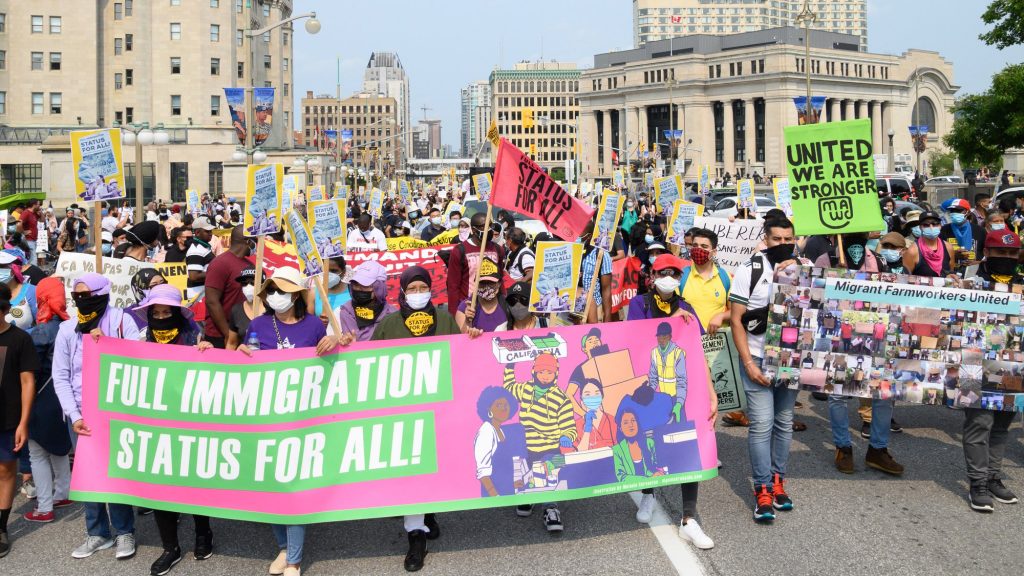 See more images from the historic march on Ottawa.

Over the last few months, the Trudeau government has announced a number of short-term, partial programs that will give access to permanent residency for some migrants. But too many have been left behind by these programs, shut out by unfair language and work requirements and high fees. Meanwhile, the same government accepted far fewer refugees and rejected far more humanitarian applications for status by undocumented people already living in Canada.

Now, with an election around the corner, the government wants to show off its exclusionary programs and say it has fixed the immigration system.

But we went to Ottawa to demand more. To say that there is no equality without status for all. To say we will leave no one behind.

Permanent resident status is about equal rights and protections. It is not a gift or a privilege, it is the only existing mechanism for migrants to access the same rights and security as any other residents. Today, over 1.6 million people are excluded from this equality in various ways through their immigration status, with the greatest exploitation faced by those that are low-income, racialized and undocumented.