While politicians and the media use anti-immigrant racism to divide us, the truth is many migrants live in daily fear of being imprisoned without charges or trial, often indefinitely. The threat of detention and deportation keeps migrants from asserting basic rights. Canada’s immigration detention system is unjust, deadly and growing.

Here are seven key messages about immigration imprisonment that you can use to talk to your family members and colleagues. On October 3rd, there are protests against detentions across the country. Keep reading to find the one nearest you.

(1) Over 32,000 people have been jailed in immigration prisons under the current government: That totals 538,000 days in detention, or 1,474 years. Canada is one of the few countries without a limit on the length of detention. Nearly 130 people have been jailed for over 99 days this year alone. As a result of detainee organizing, long term detention has gone down but the rate of removals increased this year. And there are still people languishing in jail, like Herman Emmanuel Fankem, who has been detained for over 6 years. Immigration detention is imprisonment without charge, appearance before a judge, or trial. Immigration detainees took the government to the Supreme Court for the right not to be jailed unfairly, a right recognized in law for centuries, called Habeas Corpus. 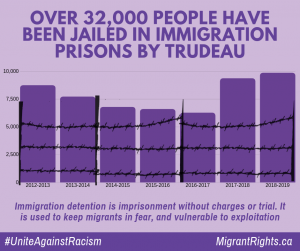 (2) Canada jails children, too: Between 2014 and 2019, Canadia jailed about 180 children per year. Last year, 48% of them were under 5 years old. Many are citizens like Alpha Anawa, who was born in immigration detention and marked his first three birthdays in prison. Parents of children born in detention are given the ‘choice’ to keep their kids with them as ‘visitors’ or have them taken into government care. Plans for the new immigration prison in Laval include a ‘playground’. 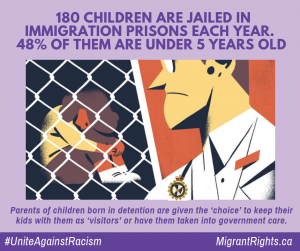 (3) People are being jailed for paperwork: 70% of migrants come to Canada with temporary status. Many are unable to renew their permits because the government rules are stacked against them. Once people lose status and remain in the country, they can be detained and deported. 81.6% of detentions in the last fiscal year were because an officer arbitrarily decided that a person would be ‘unlikely to appear’ for their deportation. Rates of release vary between decision makers and regions – you are three times less likely to be released in Ontario than anywhere else. The first ever audit of detentions took place in 2018. It identified so many concerns that it recommended a complete overhaul of all policies and a review of all long-term detention cases. To date, the recommendations have not been implemented. 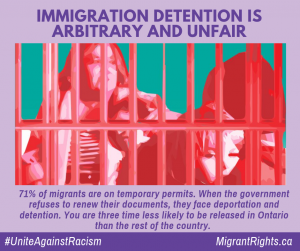 (4) Immigration detention is deadly: Five of the 17 recorded deaths in immigration jails since 2000 have happened under the current government: Melkioro Gahungu (March 7, 2016), Francisco Javier Romero Astorga (March 13, 2016), Name unknown (May 14, 2016), Theresa Marie Gratton (October 30, 2017), and Bolanle Alo (August 7, 2018). Immigration detainees routinely do not get access to the medical care or mental health supports they need. The CBSA has not released the names or causes of death of almost half of the people who have died in their custody. The government does not assist grieving families with the cost of repatriating their loved ones’ bodies. Coroner’s inquests have only happened in a few cases, and usually as a result of organized public pressure. 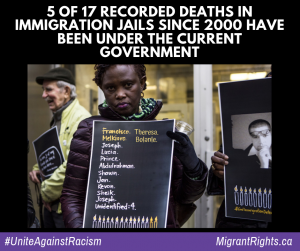 (5) Immigration detention is part of the unjust prison system: Racial profiling, overincarceration and systemic exclusions of Black and Brown communities mean that racialized migrants are disproportionately and unfairly convicted of crimes. Those who do not have citizenship can lose their immigration status after serving their sentences and face deportation – this is double punishment, and it largely targets Black communities. Take the cases of Abdoul Abdi and Abdilahi Elmi. They came to Canada as refugees and were taken into state care. Government authorities never applied for their immigration papers. When Abdoul and Abdilahi were later convicted of crimes, Canada tried to deport them. 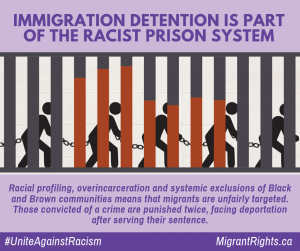 (6) Immigration detention is growing, and corporations are profiting: In 2013 and 2016, immigration detainees in Ontario went on hunger strike to call for an end to detention. In response to these demands and a spate of deaths in detention, the federal government launched the ‘National Immigration Detention Framework’ (NIDF). The NIDF increases electronic surveillance and expands prisons. Much of the $138 million allocated has been put into building a new immigration prison in Laval, Quebec, and expanding the immigration prison in Toronto. Immigration detention costs $320/day and much of that goes to private prison contractors like Tisseur, which has gone to court to silence criticism of how it profits off migrant detention. See prison profiteers in Laval Quebec here. 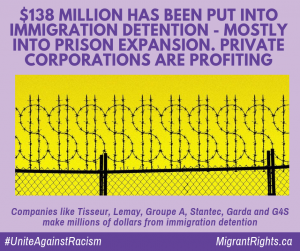 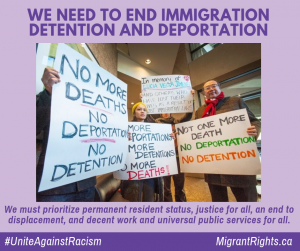 Communities across Canada are taking action against migrant detention on October 3rd. Find an action near you and raise your voice for for status for all, status now, and an end to detentions and deportations.

One last thing, we are halfway through the election campaign so we wanted to know how these Election Reality Checks are working? Please give us feedback here: https://forms.gle/CssHJLTrpewAykLZ8