It’s Thanksgiving weekend. With the election around the corner, politics are bound to come up around the dinner table, and immigration may be high on the agenda. Don’t shy away from hard conversations – talk about the people and the labour behind the food on your table, and about showing thanks for migrant workers through your solidarity. Here are five points to raise: 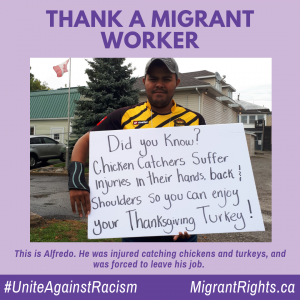 (1) The food system is reliant on migrant labour: The number of migrant farmworkers in Canada went from 41,878 in 2013 to 55,569 in 2017, a 32% increase. In 2015, temporary migrant farmworkers made up more than 1 in 10 workers in Canada’s agricultural workforce. The majority of these workers return to Canada every year, sometimes for decades on end. These agricultural workers plant, harvest, and package food, and are critical to making Canada the world’s fifth largest agricultural exporter. Farm workers also help sustain the local economies they live in through the goods and services they consume. But the Seasonal Agricultural Workers Program (SAWP), which is over 50 years old, and other agricultural worker programs do not let farm workers ever apply for permanent residency. The immigration system keeps farm workers permanently temporary, even though they are central to the Canadian agricultural industry. 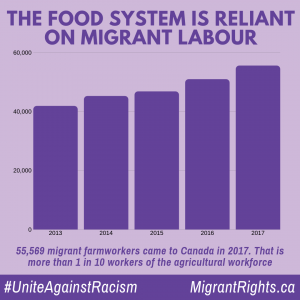 (2) Migrant farm work is indentured labour: A recent Toronto Star investigation documented 5,386 complaints by farmworkers from Mexico in a 9 year period. Workers from Mexico make up 50% of farm workers. Farm workers in many provinces are exempt from basic employment rights such as minimum wage, overtime, breaks and hours of rest between work shifts. Farm workers’ permits are tied to a specific employer. This means workers cannot leave bad jobs, and that the risk of getting fired – and subsequently becoming homeless and facing deportation – makes asserting their rights at work virtually impossible. In many provinces, farm workers are barred from the right to unionize.

As one farm worker leader said, “The country wants our labour but it does not want us.” 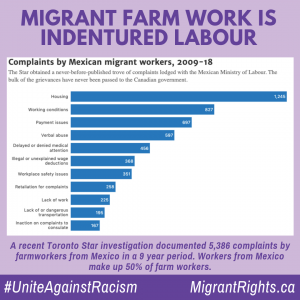 (3) Working conditions are unhealthy and dangerous: Migrant workers have inadequate health and safety training and very limited or no protective equipment. There are insufficient bathrooms in the fields. Reproductive health services are almost non-existent, and supports when facing sexual abuse are absent. When migrant workers like Sheldon Mckenzie fall sick or are injured, they are sent home. During 2001-2011, 787 workers in the SAWP were sent home for medical reasons, including for surgeries and poisoning from exposure to toxic chemicals. Seasonal migrant workers are excluded from healthcare in many provinces. Workers’ compensation is almost impossible to access. Rural communities where migrant workers live and work have limited transportation infrastructure – just this past summer in Ontario, two workers died in Norwich and Niagara from traffic accidents. Separation from families causes enormous psychological stress.

(4) Migrant worker housing is employer-controlled and substandard: Migrant farm workers mostly live in overcrowded conditions, cooking and bathroom facilities are inadequate. Heating and cooling is rarely up to par given the weather conditions and demanding physical labour on farms. Travel from housing to local shops or nearby communities is also employer-controlled. Visitors are controlled and surveilled, there are curfews, and monitored or non-existent internet access. 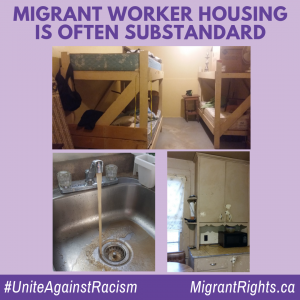 (5) We need an overhaul of our food systems: A common refrain we hear is that these are jobs Canadians don’t want to do. All work should be decent, not just work which we give high social status. That means all workers deserve decent wages and working conditions, dignity and respect at work, safety and security, and the ability to assert their workplace rights.  But we must also demand more. We must build communities that prioritize the needs and humanity of migrant farm workers as centrally as our communities rely on their labour. From clean drinking water to safe housing, accessible public transportation, healthcare, full and equal labour and immigration rights, we must build communities in which migrant farm workers and their families can thrive. We all deserve universal access to quality public services, justice, an end to discrimination and displacement. 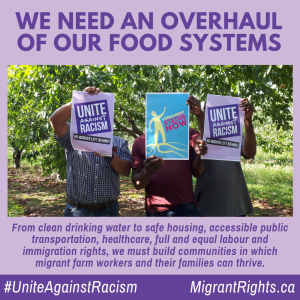