During this election campaign, almost every party has expressed concern for people “struggling to make ends meet” or pledged to make life “more affordable”. Most of the ‘solutions’ on offer, like tax cuts and credits, fail to redistribute wealth and make the economy work for the majority of us. Here are some points you can use to challenge your friends and family members to demand better. 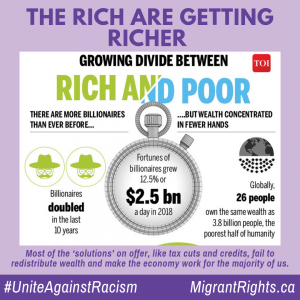 (1) Tax breaks are not enough: When politicians offer us “money in our pockets” through tax breaks, it is hard not to be tempted. But the math on tax cuts – especially when combined with service cuts – rarely adds up. Scheer has promised that an average taxpayer making about $47,000 would get an extra $8 a week; Liberals under Trudeau are promising a tax cut of about $6.50 a week. We need a lot more than a buck a day to address the fact that it is impossible to pay rent while working full time on minimum wage in Canada, or when a 24 pack of water costs $25 in Iqaluit when there is a boil water advisory. No party has committed to the kind of bold action we need to make the wealthy and corporations pay their share. Individual tax cuts are simply not enough to put the wealth we all generate back where it belongs, in universal quality public services, affordable housing and other essential social supports. 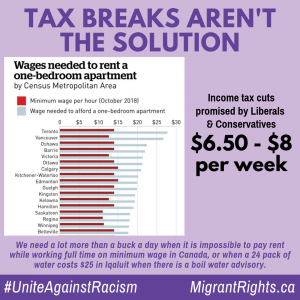 (2) Our wages are low because of the bosses: Average hourly and minimum wages, when adjusted for inflation, have not changed since 1975. But productivity has increased – that means our wages are stagnating but only the bosses are profiting. This is no accident. Corporate interests lobby governments aggressively to keep minimum wages low in order to put downward pressure on wages overall. As a result, extreme wealth is concentrating more in the hands of a very few each year. With an average compensation of $10.4 million, the richest CEOs now make about 200 times the average worker’s salary. We don’t have a crisis of affordability, we have a crisis of wealth distribution. 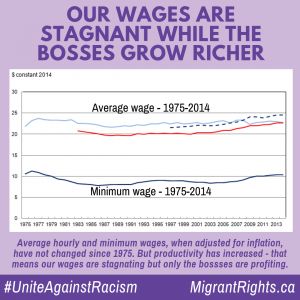 (3) Jobs are increasingly precarious for all of us: At least one in eight workers today in Canada are in a temporary job and get paid hourly average wages 24% lower than permanent workers. In addition, the majority of migrants – over 700,000 new people each year – come to Canada on temporary permits, with few rights. This impacts workers’ ability to assert workplace rights and be paid the wages they have worked for. In a survey of migrant 132 caregivers conducted by the Caregivers’ Action Centre (CAC) in Ontario, 42 percent of caregivers reported working 11 hours a day or more. Of those working overtime, 74 percent did not get overtime pay. When laws and policies prioritize corporate profit over the public good, all workers lose. 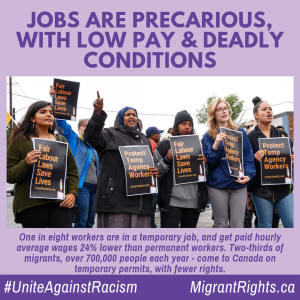 (4) Bad jobs and low wages affect all of us, but impact people of color and particularly women more:  On average women earn 36% less than men for the same job in average annual earnings. National census data shows that of those considered low-income, 42.9% are non-permanent residents and 31.4% are landed immigrants who have been in the country for less than 5 years. The wage gap for first and second-generation immigrants is real. Over 80% of reserves have a median income that falls below the poverty line. Racism and sexism stratify the labour market, and so we need systemic solutions to fight the forces that keep most of us poor while a few hoard wealth. 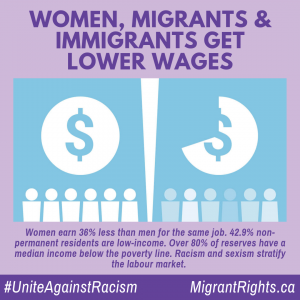 (5) We need to build a whole new economy: Temporary and precarious work is growing for all of us, our wages are falling, and racialized poverty is worsening. Meanwhile, the wealth of those at the top continues to explode. This is a crisis and gradual individualized solutions, like personal income tax cuts, will not solve it. We need to retool our economy so that it works for the majority and sustains healthy thriving communities. We need to move away from a drive for profit and growth towards a society that prioritizes care and dignity. We need a minimum wage that people can live on. We need permanent resident status for all. We need universal services – including housing, healthcare, education, public transportation, and more – and an end to displacement. 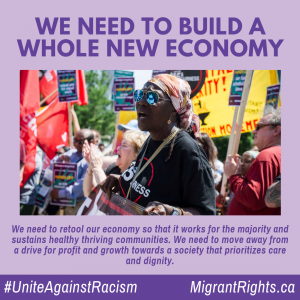