Yesterday, well known anti-immigrant leader Maxime Bernier was invited to the Federal Leaders’ debate. Soon his racist views will be televised across the country. Already, we saw Conservative Leader Andrew Scheer use a well-worn lie about refugees in the first leaders debate on Thursday. Many of our friends and family members are listening and might find these untruths convincing.

Here’s what you need to know when you talk to them:

1. Refugees aren’t responsible for cuts to services or low-wages, the super rich are – Many people are feeling like they don’t have enough to take care of their families, or save for retirement. We are being convinced that there is not enough for everyone. In this climate, arguments that blame refugees for taking services are gaining traction. This is why we must remind our friends and family members that while refugees take very little the super rich in Canada have stashed $353 Billion in offshore tax havens, and nearly 27% of corporate taxes went unpaid according to the CRA. 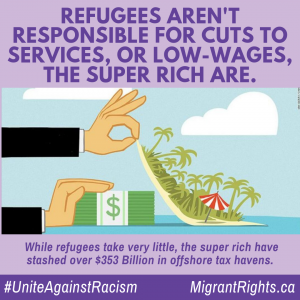 2. Canada doesn’t take its fair share of refugees – Of the over 70 million people globally forced out of their homes, Canada will let in less than 50,000 in 2019. That’s 0.07% of displaced people, despite Canada making up 1.36% of total global wealth (GDP). In Lebanon on the other hand, which has the world’s third highest debt,  1 in 4 people are refugees. 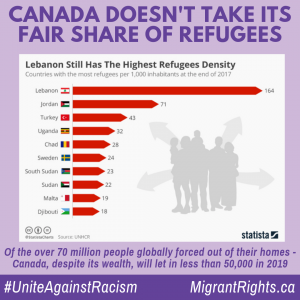 3. Canadian corporations profit from displacement  – People become refugees because of war and conflict, “development projects”, persecution and climate change. Canadian corporations profit from processes that displace people. Canada ranks as one of the top 15 exporters of deadly weapons, hosts many of the worst mining companies and is home to the world’s worst industrial polluting projects – the oil sands. No conversation about refugees is possible without accounting Canadian complicity in displacement 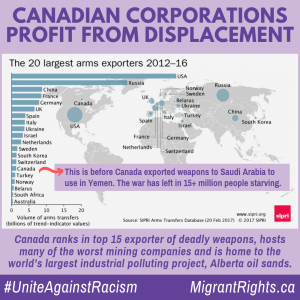 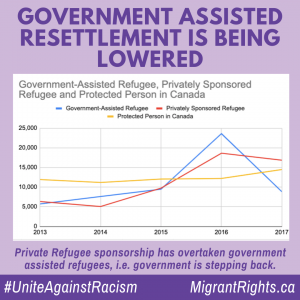 5. Refugee decisions are arbitrary, few are accepted – When refugees apply from inside Canada, they come up against an extremely arbitrary decision system, with some decision makers accepting 97% of the claims they hear, and others only accepting 10%. Getting approved is so difficult, and it takes so long (on average 21 months to have a hearing) that many people drop off before they get a decision. As a result, only 1 in 3 initial asylum seekers get accepted. 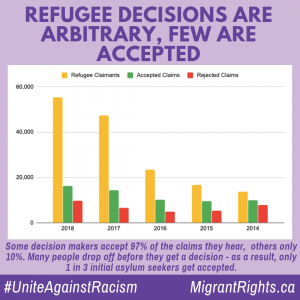 6. Refugees were gravely attacked this year  – Snuck into the most recent budget bill was a change to the refugee act so that refugee claimants who have made claims in the US, UK, Australia or New Zealand before cannot apply for refugee protection in Canada. Arbitrarily excluding people from claiming refugee status at all is one of the most fundamental attacks on refugee rights in the last decade, and flies against the constitutionally protected right to a hearing. 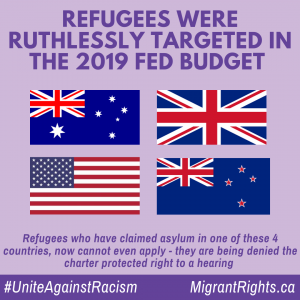 7. Border crossers from the US is overhyped – Over the last 3 years, just over 45,000 people crossed into Canada from the US and applied for refugee protection. That’s a very small number when compared to total refugee applicants (138,000) or other temporary migrants (over 2 million) in that same time period. For those concerned about security, it’s important to remember that Canada lets in over 24 million tourists each year from the US through the same borders and does the same security checks. Focussing just on people of colour and their security is more about racism. 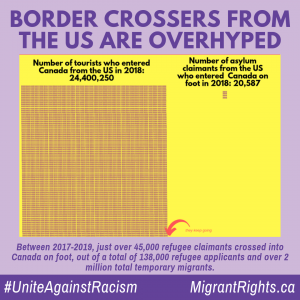 8. Refugees don’t get too many services – In-country refugee applicants (which includes border crossers) only receive provincial social assistance if they are eligible. Out of country applicants that are privately sponsored – which is many of them – get no assistance. Government assisted refugees receive support for a year – but some of it they have to pay back, in some cases with interest. Watch this video by CBC. 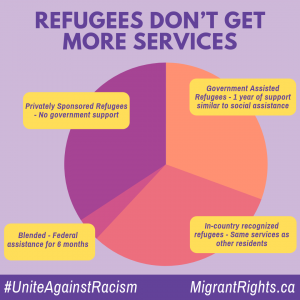 9. We need a whole new approach to Refugee laws – Refugee laws are deeply connected to foreign policies and corporate practices that result in displacement in the first place. Canada’s refugee laws see refugees as economic participants, focusing on refugees’ ability to work, pay taxes and access services. And as refugees build a life, they become residents like everyone else. We need a totally different economic and social system where people are not forced to leave their homes, and those that arrive here, get full rights, permanent status and services on arrival. At the same time, we need decent work, universal services and an end to discrimination for everyone. 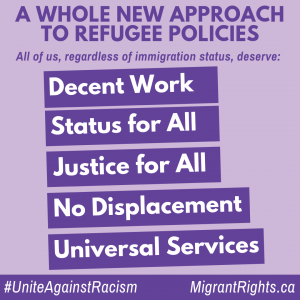