It is no coincidence that the politicians refusing to act on climate change are the same ones drumming up hatred against migrants. Those who have brought us to the brink of climate catastrophe want to evade their responsibility by selling us ineffective individualistic solutions and put the blame elsewhere. To win action on climate, we must reject the politics of division and racism. 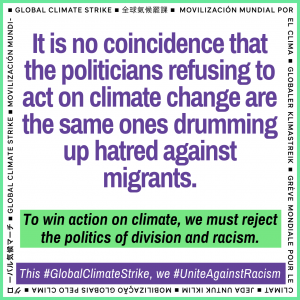 Climate justice, racism and migration are not separate concerns. The economic system that has brought us to climate crisis also produced the racialized wage gap and a two-tiered immigration system that gives migrants few rights. Climate change is global, but it disproportionately impacts the poorest people of colour in the world, causing greater insecurity and displacement. And yet those responsible –  super rich corporations and their CEOs who receive massive government handouts – are getting let off the hook by politicians who try to distract us by blaming immigration for our problems. But Indigenous and racialized people are at the forefront of creating climate solutions.

Here are 4 key talking points you can raise with your co-workers, friends and families this week:

(1) Human-made climate change is real, and corporations are responsible: Science and Indigenous knowledge tell us that carbon emissions are pushing us towards global temperature rises that are deadly. Just 100 companies produce fossil fuels that account for 71 per cent of global emissions. But instead of paying up, oil and gas companies in Canada are pocketing more than $3.3 billion a year in government subsidies. In 2018, the Canadian government put taxpayers on the hook for up to an additional $15 billion in support for the fossil fuel industry. The Federal Carbon Tax is not a solution – it excludes nearly 80% of big oil and gas carbon emitters. Individual action is not enough. We must reject the idea that migrants abuse government handouts or that population increases are to blame for climate change. We must focus on corporate accountability instead. 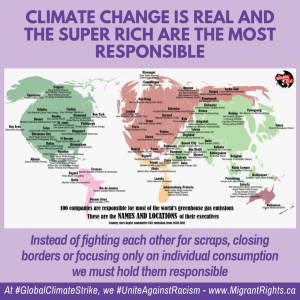 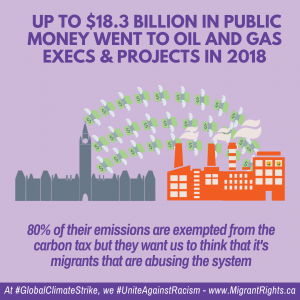 (2) Climate change affects all of us, but not in the same way – and racism has everything to do with it: Climate change has caused a 25 per cent increase in economic inequality between the richest countries (which are historically the worst emitters) and the poorest (who produce the least emissions). Canada emits the most greenhouse gas emissions by population than any other country on the planet, but is the least threatened by the consequences of climate change. In 2015, it was estimated that Canada’s debt to poorer countries for its role in causing climate change was at roughly $400 billion – and that doesn’t account for the ravages caused by Canadian companies operating destructive projects in poor countries. Even inside Canada, racialized people, particularly Indigenous nations, face the worst environmental impacts – see for example this new film about Mi’kmaq and African Nova Scotian communities. 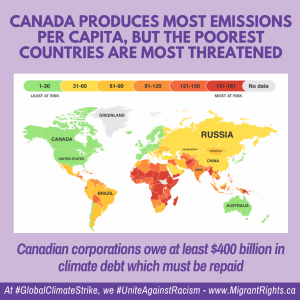 (3) Climate change is forcing millions out of their homes – migrants need permanent resident status and full rights: The biggest impact of climate change is increased food insecurity and greater poverty, the brunt of it faced by women. Most people migrating because of climate change – an anticipated 143 million by 2050 in just 3 regions – remain within national borders. People migrate for many reasons, most often  in search of work and safety, and not just to escape climate related disasters. And yet over 70% of migrants to Canada have no choice but to come on temporary permits, forced into  low-waged work with high rates of abuse. Addressing climate change must include a complete overhaul of our immigration system, starting with permanent resident status for all on arrival for temporary migrants. 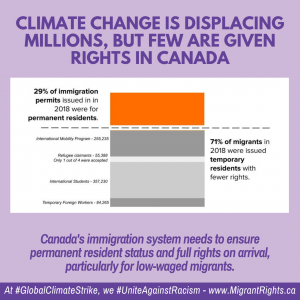 Millions of people around the world are taking actions this week as part of #GlobalClimateStrike, including across Canada. Find the nearest action near you and participate: https://climatestrikecanada.org/september. Print out these signs and carry them, and take these flyers to distribute.