Since the beginning of this election campaign, much has been said about Quebec’s Law 21. It will feature heavily in today’s leaders’ debate in French.

Under the guise of secularism, Quebec’s Law 21 is whipping up anti-immigrant sentiment and Islamophobia. But this strategy is not unique to Quebec; it is part of a broader attack on migrants through provincial and federal laws and policies across the country. There is widespread resistance to Law 21 in Quebec. We must amplify that resistance and reject all forms of racism that serve to distract and divide us. Here are 7 things you need to know:

(1) Law 21 attacks workers: Law 21 bans people who wear religious symbols like hijabs, turbans or yarmulkes from working in various public service jobs. As an example, many hijab or turban-wearing graduates from teachers’ college can no longer apply for jobs or were denied employment. Some recently hired teachers have made the difficult decision to remove their religious attire to hold onto their jobs. Teachers already employed prior to the introduction of the law can keep their jobs, but are not allowed to transfer schools or be promoted.

(2) Law 21 is part of a broader racist anti-immigrant agenda: Law 21 was introduced along with Law 9, which cancelled 20% of permanent residency immigration applications managed by Quebec, affecting approximately 50,000 people. At the same time, the provincial government increased temporary work permits – which means fewer rights – by 21%. Taken together, Law 21 and Law 9 represent a pandering to far-right, anti-immigrant sentiment. 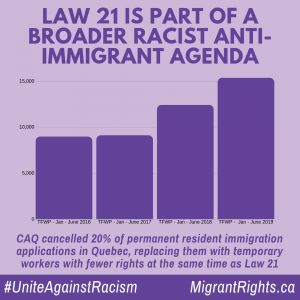 (3) Debates about ‘values’ are used to exclude migrants and racialized people: While secularism is important to many inside and outside Quebec, Law 21 exploits that principle to target certain communities. A recent poll showed that the majority of support for Law 21 comes from anti-Muslim sentiment. Law 21 is a clear violation of the basic civil and labour rights of the people it affects. By invoking the notwithstanding clause of the Charter of Rights and Freedoms in the text of the law itself, Law 21 excludes people directly affected from the right to challenge it. There is a long history in Canada of politicians invoking ‘Canadian values’ to justify more exclusionary and discriminatory policies against migrants – from Harper’s “barbaric cultural practices hotline” to proposals for “values tests” in this current election campaign. 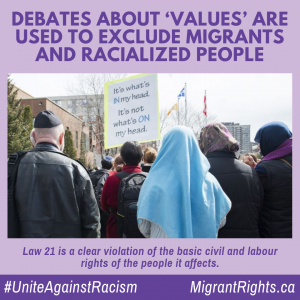 (4) Anti-immigrant and racist laws and policies are not unique to Quebec: In Ontario, the Conservative government recently cut all legal aid funding for immigration services. Most public services shut out migrants. Racialized poverty is instituted in law. Police harassment and over incarceration of Black and Indigenous people has been documented across the country. 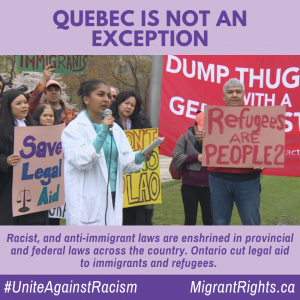 (5) Politicians using anti-immigrant sentiment in Quebec are just like politicians who work for the rich everywhere: Law 21 was passed in June 2019 by the new Coalition Avenir Québec (CAQ) government. While the debate on Law 21 was underway, the CAQ gave themselves and their wealthiest friends a massive tax break by cutting school board property taxes in wealthy districts. The billionaire Desmarais family alone received a $111,000/year tax break through this scheme. 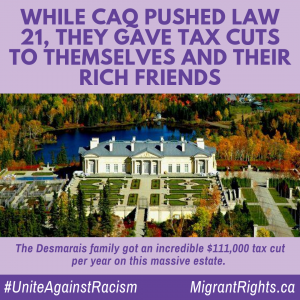 (6) Communities across Quebec are fighting Law 21: Despite the barriers to legal challenges built into Law 21, it is being challenged in the courts. Mass protests are taking place regularly, led by migrant and racialized communities, bringing thousands of people into the streets. New organizations have been formed to challenge racism and xenophobia and build inclusive communities, and public education campaigns are underway.

(7) We must oppose racist laws and policies wherever we are: The election debate has focused on whether the next federal government will intervene to challenge Law 21. But it is up to us to stop the rise of anti-immigrant sentiment in our communities. Racism is a tool to divide us and weaken our ability to achieve our common goals. Join racial and economic justice organizations, prevent racists from getting a platform, and challenge racist myths and false news. Let us ensure decent work, universal services, justice and status for all. 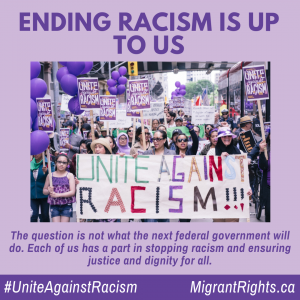 Compiled as always by Karen and Hussan from the Migrant Rights Network, with incredible support and assistance from Jaggi Singh